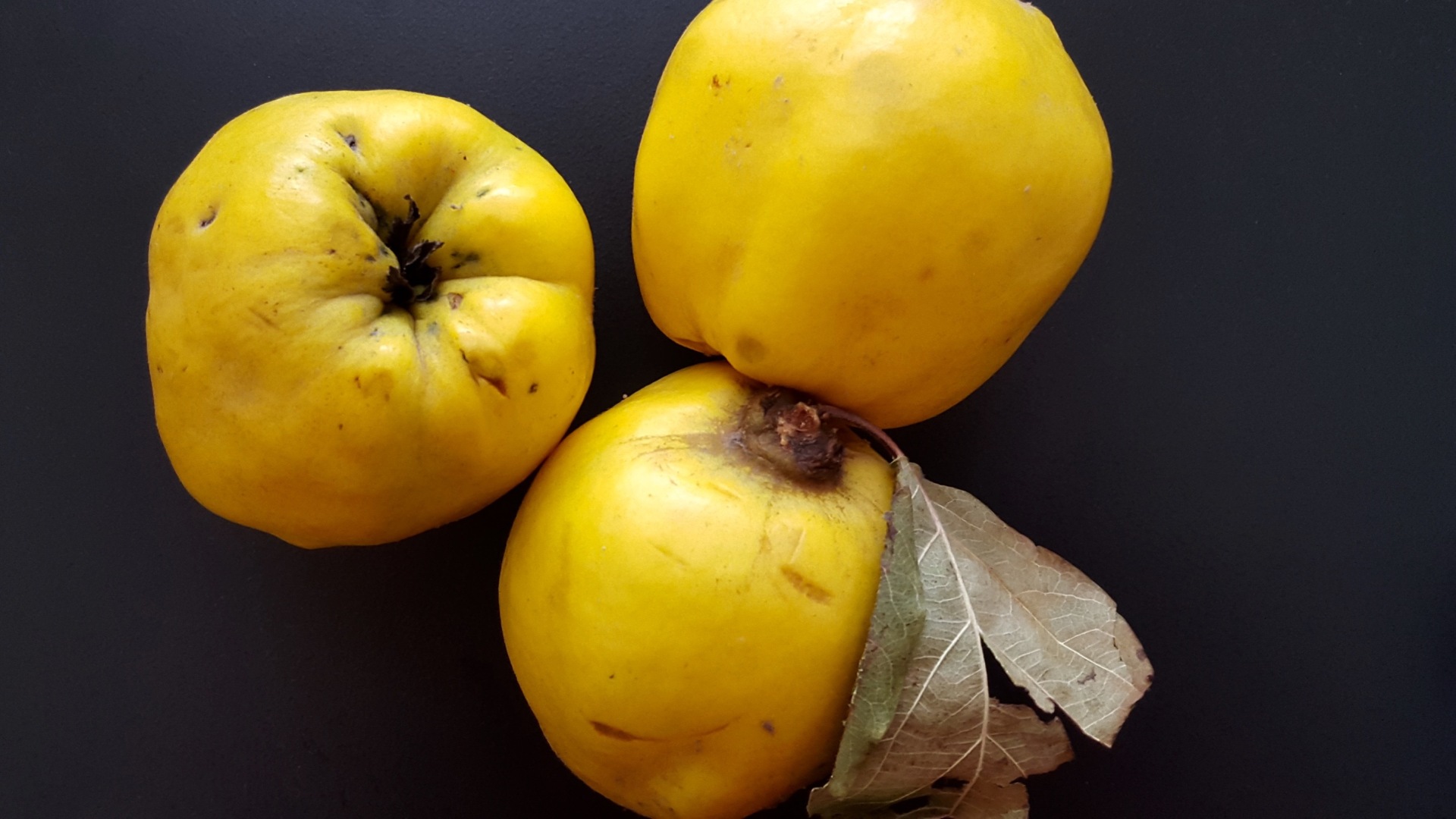 Quince may be the ugly duckling of tree fruit in the United States.

Wait, no. That is too gentle.

Quince is the freckled, red-headed step child of tree fruit in the United States. There’s nothing else you can call a fruit that receives a response of ‘what is that?’ when asking for it an orchard which grows it.

Its there, mostly taking up room among the apples in mid to late fall at the farmers market, looking like an unloved, freckled, red-headed ugly apple or pear. Or actually like a very hard, chartreuse-hued, slightly fuzzy, knobby pome fruit. No mere apple or pear is that interesting to describe.

Older than apples, quince is likely the fruit being referred to in ancient documents mentioning apples. When very ripe, the fruit turns golden, losing the fuzz that covers it when still green, and become soft enough to eat raw. It also becomes very fragrant, a scent I’ve heard described frequently as that of ripe pineapples, but seems more like the sweet smell of leaves as they begin to decompose. Blame that scent association perhaps with the daily walks ankle-deep in slowly decomposing fallen leaves.

The following recipe, for ate de membrillo, or quince marmalade, describes the best, or at least easiest, way I have of making this thick preserve, taking advantage of the nature of the fruit and lazy use of kitchen equipment. This is a food I’ve made for years, with batches varying from two pounds to 20. Each of those batches was made in a slightly different way, using more or less sugar, granulated or brown, with vanilla, without. Peeling the fruit, dicing small, etc. I’ve learned things when working a large batch of hot sticky paste requiring constant stirring, capable of spewing like molten lava from a volcano.

In Spain, dulce de membrillo, as it is called there, is traditionally paired with aged Manchego cheese. In Mexico, where the fruit and the preserves are very popular, it is used as pastry fillings, perhaps in some nice empanadas. This preserve is much thicker than the average jam. Though it can be canned easily, it is typically poured into block molds, sometimes dusted with sugar. It is not uncommon to hear this sweat tread referred to as queso de membrillo, or quince cheese.

Look for quince that is yellow, smooth, and free of black spots. The fruit does not ripen much after cutting from the tree, but it will lose its soft fuzz. If not available at a local farmers market, it can be found in Mexican grocery stores in the late fall months.

This years batch of ate de membrillo was made from 6.625 pounds of fruit, resulting in slightly over a gallon of preserves. Clearly, this is a ridiculous amount to make.

Wash the fruit very well. Cut into quarters. Trim away the blossom end of the fruit, or the bottom, as well as any bruised parts. Chop roughly. Keep the cut fruit submerged in cold water with the juice of a lemon squeezed in.

Place the cut fruit in a saucepan, cover with cold water. Add star anise, and a crushed stick of Mexican cinnamon. Bring to a simmer, and cook until the fruit is soft.

Strain and reserve the cooking liquid, if desired, as this is now liquid pectin. It can be frozen until ready to use.

Weigh the puree, and measure out, by weight, an equal amount of granulated sugar. If desired, the amount of sugar can be reduced by up to 25% of the weight of the puree.

Place the puree and the sugar in a thick bottomed pot, stirring well to combine. Cook over low heat, stirring frequently. Cooking time varies greatly by batch size, and can be several hours. Continuous, frequent stirring is necessary to prevent burning. Be very careful to watch for splatter. When ready, the marmalade will be a deep amber color, feel quite dry and stick to a spoon without dropping back in the pot.

The finished preserves can be canned, or poured into greased molds and refrigerated.